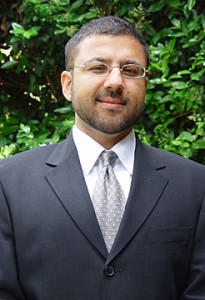 Office of Religious and Spiritual Life

Varun Soni serves as the Dean of Religious Life of USC. In this role, he brings together the spiritual and scholarly resources of the university, provides moral and ethical leadership for the USC community, and works closely with the 90 student religious groups and the 40 religious directors on campus. He also oversees interfaith engagement and community service initiatives, organizes interdisciplinary events that explore religion broadly conceived, and leads ceremonial and memorial events.

Dean Soni is a University Fellow at USC Annenberg’s Center on Public Diplomacy and is also a regular contributor to the Huffington Post. He is a member of the State Bar of California, the American Academy of Religion, and the Association for College and University Religious Affairs. He is on the advisory board for the Center for Muslim-Jewish Engagement, the Music Preservation Project, CrossCurrents, and the Journal for Interreligious Dialogue. Prior to joining USC, Dean Soni spent four years teaching in the Law and Society Program at UCSB. He also produced and hosted his own radio show on Pacifica/KPFK showcasing music from South Asia and its diaspora. Born in India and raised in Southern California, he has family on five continents and they collectively represent every major religious tradition in the world.

Dean Soni received his B.A. in Religion from Tufts University, where he also earned an Asian Studies minor and completed the Program in Peace and Justice Studies. He subsequently received his M.T.S. from Harvard Divinity School and his M.A. through the Department of Religious Studies at UCSB. He went on to receive his J.D. from UCLA School of Law, where he also completed the Critical Race Studies Program and served as an editor for the Journal of Islamic and Near Eastern Law. He earned his Ph.D. through the Department of Religious Studies at the University of Cape Town, where his doctoral research focused on religion and popular culture. As an undergraduate student, Dean Soni spent a semester living in a Buddhist monastery in Bodh Gaya, India through Antioch University’s Buddhist Studies Program. As a graduate student, he spent months doing field research in India through UCSB’s Center for Sikh and Punjab Studies.